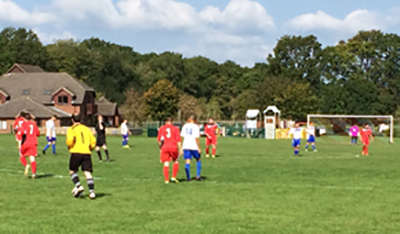 The theatre is easily accessible to wheelchair users and has a hearing induction loop.

In spring 1934 a young man called Donald Chown wanted to be in a play so he collected a group of friends together and they performed Journey’s End in Guildford Borough Hall (now demolished). They put the whole production together in four weeks. From 1935 onwards they put on two plays a year, in the East Horsley WI Hall (also long demolished). With 20 members the group was typical of amdram in the 30s. Rehearsals were held in empty houses that were being built by the Chown family. They called themselves the Nomad Players because they were continually moving from one house to another as they were finished.

By the 1970s more space was needed so a wooden hut was bought from Horsley Towers. The new theatre with its fly tower, revolving stage and raked auditorium was opened in 1998 with a celebration production of Under Milk Wood a play with many roles so that every member who wanted to could take part.

Today the theatre puts on seven main stage plays or musicals a year and one or two studio plays for experimental work and new directors.  Other amateur companies perform with them, currently Bookham Light Operatic Society and Showdown Theatre Arts. The Nomes and Young Nomads are thriving and perform their own studio and main house productions. The building was designed to be accessible to all. To make full use of these facilities a project called Play in a Week started in 1999. Adults with a wide range of disabilities meet to rehearse and develop a play that will be performed on a Saturday evening and Sunday afternoon.

The West Horsley Independent Players (The Whips) were formed back in 1948, originally as the Drama section of the local W.I. The Whips stage two shows per year and every two years, the hugely popular pantomime. There are also two separate groups, The Young Whips and Whippets, for teenagers and younger children. Rehearsals are held within Horsley and performances are held in the West Horsley Village Hall which is transformed into a theatre using modern lighting and sound equipment, seating an audience of 130. The Whips are members of GATA (Guildford Amateur Theatre Association) and NODA (National Operatic and Dramatic Association). In The Street in West Horsley, are The Coach House, a two-storey scenery store, workshop and paintshop, a paradise for craftsmen and West Horsley Village Hall.